Heather Davis and Jose Padua are powerhouse poets and writers that have worked and encouraged each other's work throughout the years.  Listen to us discuss their journey, their writing process and their challenges and their joys as poets who are married together with children.
http://yourartsygirlpodcast.com/episodes 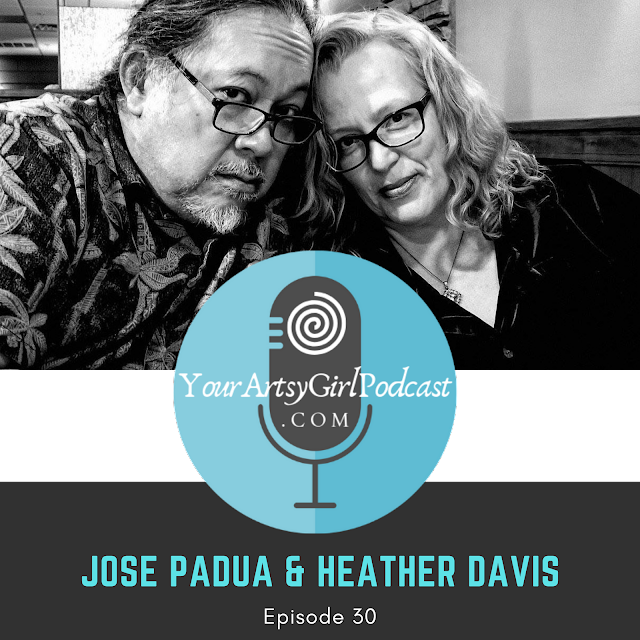 Bio:
Jose Padua’s first full-length book, A Short History of Monsters, was chosen by former poet laureate Billy Collins as the winner of the 2019 Miller Williams Poetry Prize and is now out from the University of Arkansas Press. His poetry, fiction, and nonfiction have appeared in publications such as Bomb, Salon.com, Beloit Poetry Journal, Exquisite Corpse, Another Chicago Magazine, Unbearables, Crimes of the Beats, Up is Up, but So Is Down: New York's Downtown Literary Scene, 1974-1992, and others. He has written features and reviews for Salon, The Weeklings, NYPress, Washington City Paper, the Brooklyn Rail, and the New York Times, and has read his work at Lollapalooza, CBGBs, the Knitting Factory, the Public Theater, the Living Theater, the Nuyorican Poets' Café, the St. Mark's Poetry Project, and many other venues. He was a featured reader at the 2012 Split This Rock poetry festival and won the New Guard Review’s 2014 Knightville Poetry Prize.

After spending the past ten years with his wife (the poet Heather L. Davis) and children in Virginia’s Shenandoah Valley, he and his family are back in his hometown, Washington, D.C. Padua also writes the blog Shenandoah Breakdown,  (http://shenandoahbreakdown.wordpress.com/).

Samples:
These So Long Days We Spend in the Middle of Things--Shenandoah Breakdown
https://shenandoahbreakdown.wordpress.com/2016/07/31/these-so-long-days-we-spend-in-the-middle-of-things/

A Short History of Everyone in the World – Verse Daily
http://www.versedaily.org/2019/ashorthistoryofeveryone.shtml

A Life of Uncontrollable Urges (or Tourette’s and the Writing Life)
https://voxpopulisphere.com/2014/08/21/jose-padua-a-life-of-uncontrollable-urges-or-tourettes-and-the-writing-life/ Bio:
Heather Lynne Davis earned a B.A. in English from Hollins University and an M.A. in creative writing from Syracuse University. She attended the Bucknell Seminar for Younger Poets and is a winner of the Hayden Carruth Poetry Prize at Syracuse University, a Larry Neal Writer’s Award, Bethesda Literary Festival essay and poetry prizes, and the Arlington County Moving Words Poetry Contest. She is the author of The Lost Tribe of Us, which won the 2007 Main Street Rag Poetry Book Award and has published two short stories in the Rehoboth Beach Reads anthology series. A short story is also forthcoming in the anthology Us Against Alzheimer’s: Stories of Family, Love, and Faith. Her poems have appeared in Cream City Review, Gargoyle, Poet Lore, Puerto del Sol, and Sonora Review, among others. She lives in Washington, DC with her husband, the poet José Padua, and their son and daughter. She is at work on a novel.

A few poems and links to poems are here: https://heatherlynnedavis.com/poetry/


Check out my first episode!