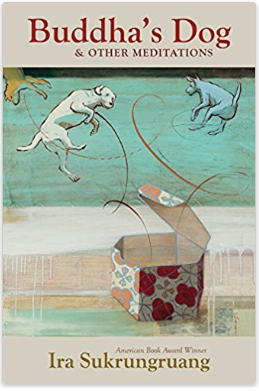 Living in the Tampa Bay area for some years now, aside from finally attending AAWP this year that was held in Tampa, I wanted to know what writers live around me.  Lo and behold, there is a prominent writer who is also Asian American. Thai-American to be exact and his name is Ira Sukrungruang and he is a creative writing professor at University of South Florida's MFA program. I have heard his name in certain circles before, but I searched University of Tampa's booth out at the writer's conference and got to meet Ira and purchase his latest collection of personal essays.

Let me tell you, what depth and breadth of his prose, though seemingly personable in diction, like listening to your best friend confessing his or her worries and fears, it is balanced with a great amount of humor and heartbreak.  Most of all, it is also interspersed with such lyricism and universal truths.

Buddha's Dog & Other Meditations seemed at first to have a congruous timeline that starts off with a boy who felt out of place in the United States growing up in  Chicago suburbs and very anchored to his parent's past, his parent's baggage from the mother country. Sukrungruang wrote about his childhood trips to Thailand, "I forgot I was born in Chicago.  Forgot that I was American. Forgot English. My other life eight thousand miles away, like a dream. It didn't take long, a week really, suddenly I was Thai, the most Thai I'd ever felt.  My father would tell me to speak English, to show off my American tongue to his friends at the VW garage."

The narrator shows the parallel between Buddha and dogs--this theme is interwoven through the essays. He talks of the dogs he had in the past, the dog he knew in Thailand, and also speaks of literary dogs such as "The Lady with the Dog" by Chekhov. Dogs, of course, are depicted as humble and kind sentient beings with a Buddha's nature.

This is more than a coming of age collection of stories with characters that stood out, characters that one can fall in love with, even with their flaws and all.  The narrator comes to terms with many setbacks: his parent's divorce, his struggle with body image and relationships with women.  The essays move from the 70s, and 80s and through his college days, to the near present with a few paintings from a renown contemporary visual artist, Trenton Doyle Hancock, and essays springing from them as narrative practices exploring the self and body.

The strongest character that stood out the most, the person that has been present-center throughout his life: his mother.  She does not at times hold punches, providing the narrator with doses of realism and tender brevity.

There are many, many morsels that these essays contain--another writer I am so glad to have met.  This collection will linger, finely crafted, and full of wisdom. 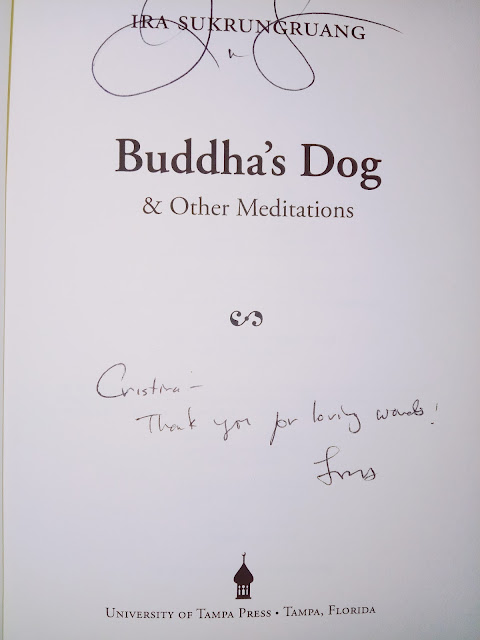 August 06, 2019
Listen to Briana discuss how she got into poetry, her new collection & future projects & plans! http://yourartsygirlpodcast.com/episodes You can by her book here:  https://www.amazon.com/Loose-Lips-Briana-Mu%C3%B1oz/dp/1889568066 Interview on San Diego Voyager:  http://sdvoyager.com/interview/meet-briana-munoz-briana-munoz-north-county Instagram: @womanofwords BIO: Briana Muñoz is a writer from San Diego, CA . now living in Los Angeles, CA. Her poetry and short stories have been published in four editions of the Bravura Literary Journal. In the 2016 publication of the Bravura, she was awarded the second-place fiction prize. She has been published in LA BLOGA, an online publication, the Poets Responding page and in the Oakland Arts Review. Her poem “Rebirth” was featured in the Reproductive Health edition of the St.  Sucia  zine, a publication dedicated to “Exposing What It Is  To  Be A  Mujer ”. Briana’s work was one of ten chosen for “The
Post a Comment
Read more

December 01, 2016
Eileen Tabios, my long time poet/writer friend, wrote about my art I had given to her a while back in her blog:   Eileen Lives with Art
Post a Comment
Read more

May 15, 2020
Check out this episode with writer, Anya Ow, a Singaporean residing in Australia.  We discuss her work, her "co-workers" (cats), & reads a segment from her newly released novella, "Cradle and Grave". http://yourartsygirlpodcast.com http://anyasy.com http://neonhemlock.com Check out my first episode!
Post a Comment
Read more